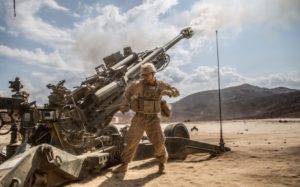 The deployment, if approved by Defense Secretary Jim Mattis and President Trump, would potentially double the number of U.S. forces in Syria and increase the potential for direct U.S. combat involvement in a conflict that has been characterized by confusion and competing priorities among disparate forces. The U.S. military has drawn up early plans that would deploy up to 1,000 more troops into northern Syria in the coming weeks, expanding the American presence in the country ahead of the offensive on the Islamic State’s de facto capital of Raqqa, according to U.S. defense officials familiar with the matter.

Trump, who charged former president Barack Obama with being weak on Syria, gave the Pentagon 30 days to prepare a new plan to counter the Islamic State, and Mattis submitted a broad outline to the White House at the end of February. Gen. Joseph Votel, head of U.S. Central Command, has been filling in more details for that outline, including by how much to increase the U.S. ground presence in Syria. Votel is set to forward his recommendations to Mattis by the end of the month, and the Pentagon secretary is likely to sign off on them, according to a defense official familiar with the deliberations.

If the deployment is approved by Secretary of Defense Jim Mattis and President Trump, it would double the number of U.S. service members already in Syria. (The Washington Post)

While the new contingent of U.S. troops would initially not play a combat role, they would be entering an increasingly complex and dangerous battlefield. In recent weeks, U.S. Army Rangers have been sent to the city of Manbij west of Raqqa to deter Russian, Turkish and Syrian opposition forces all operating in the area, while a Marine artillery battery recently deployed near Raqqa has already come under fire, according to a defense official with direct knowledge of their operations.

The moves would also mark a departure from the Obama administration, which resisted committing more ground troops to Syria.

The implementation of the proposed plan, however, relies on a number of variables that have yet to be determined, including how much to arm Kurdish and Arab troops on the ground, and what part regional actors, such as Turkey, might have in the Raqqa campaign.

The new troops, if sent, would be focused on supporting Kurdish and Arab fighters in northern Syria battling the Islamic State. Under the plan, the added American forces would act primarily as advisers, offering expertise on bomb disposal and coordinating air support for the coalition of Kurds and Arabs, also known as the Syrian Democratic Forces.

About 500 U.S. Special Operations forces are already in Syria operating alongside the SDF, in addition to about 250 Rangers and 200 Marines. The new U.S. troops, if approved, would probably come from parts of both the 24th Marine Expeditionary Unit — a flotilla of ships loaded with 2,200 Marines that is now steaming toward the region — and the U.S. Army’s 82nd Airborne Division, from which 2,500 troops are headed to Kuwait. These conventional troops would supplement the Special Operations forces already on the ground and operate much like their counterparts fighting in the Iraqi city of Mosul.

“This would still be by, with and through our local partners on the ground,” one defense official said of the potential surge. The official, like others, spoke on the condition of anonymity to discuss plans that have not yet been made public.

The new Syria deployments are set to occur in tandem with a likely White House decision that would officially abolish the troop caps that were put in place for U.S. forces in Iraq and Syria by the Obama administration. The number of troops in Iraq and Syria were officially capped by the previous administration at about 5,000 and 500, respectively. Military commanders have said in the past that the caps have split up units for the sake of keeping troop numbers low.

“If the caps were removed, it would allow us to fight as we train,” said the defense official who discussed the potential surge. “Military doctrine promotes agility, and it would help us respond as conditions dictate.”